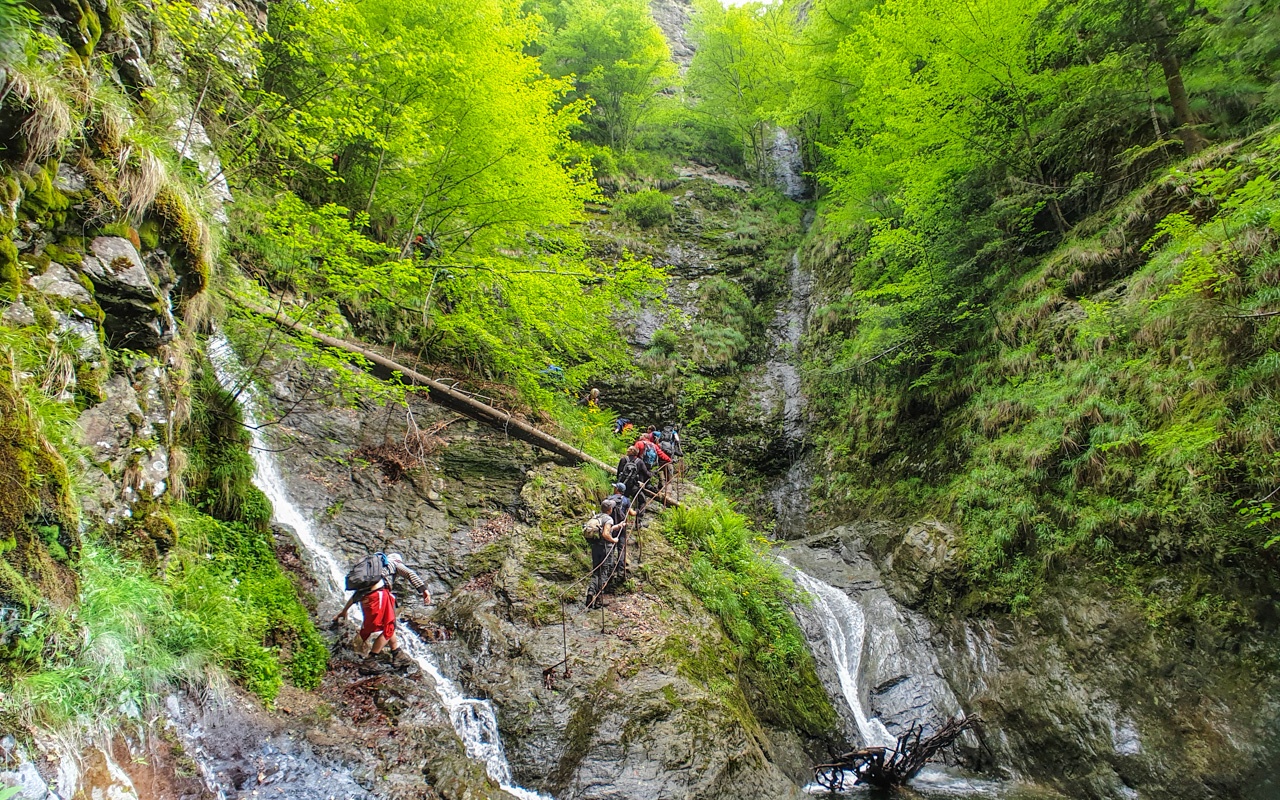 Stan Valley Canyon, the world of rocks and waterfalls, is one of the most beautiful hiking trails in Romania. Spectacular, this winding road through the heart of the mountains is just a part of what the Făgăraş Mountains have to offer to tourists. Starting from Transfăgărăşan, near the Vidraru Dam, you step into one of the most interesting and challenging canyons of Romania. The landscapes of Stan Valley do not resemble each other. Every part you go through has something surprising. This route was initially set up in the 1950s and 1960s at the same time as the Stan River’s hydrological arrangement. In 2012 the trail was upgraded. Stairs have been changed, new chains have been set up, and the route itself has been modified in some areas to make it safer.

Stan’s Valley – The Land of rocks

The first image of rock walls tens of meters high is overwhelming. If it is a clear day without clouds, the contrast between the rust of rocks and the bright blue sky surpasses any expectations.

By far the most beautiful and spectacular part is the area with the footbridge that crosses the valley between two spectacular waterfalls. The sound, the colors, the cliff, the hurried water, the height you are in are impressive and you can not miss that! 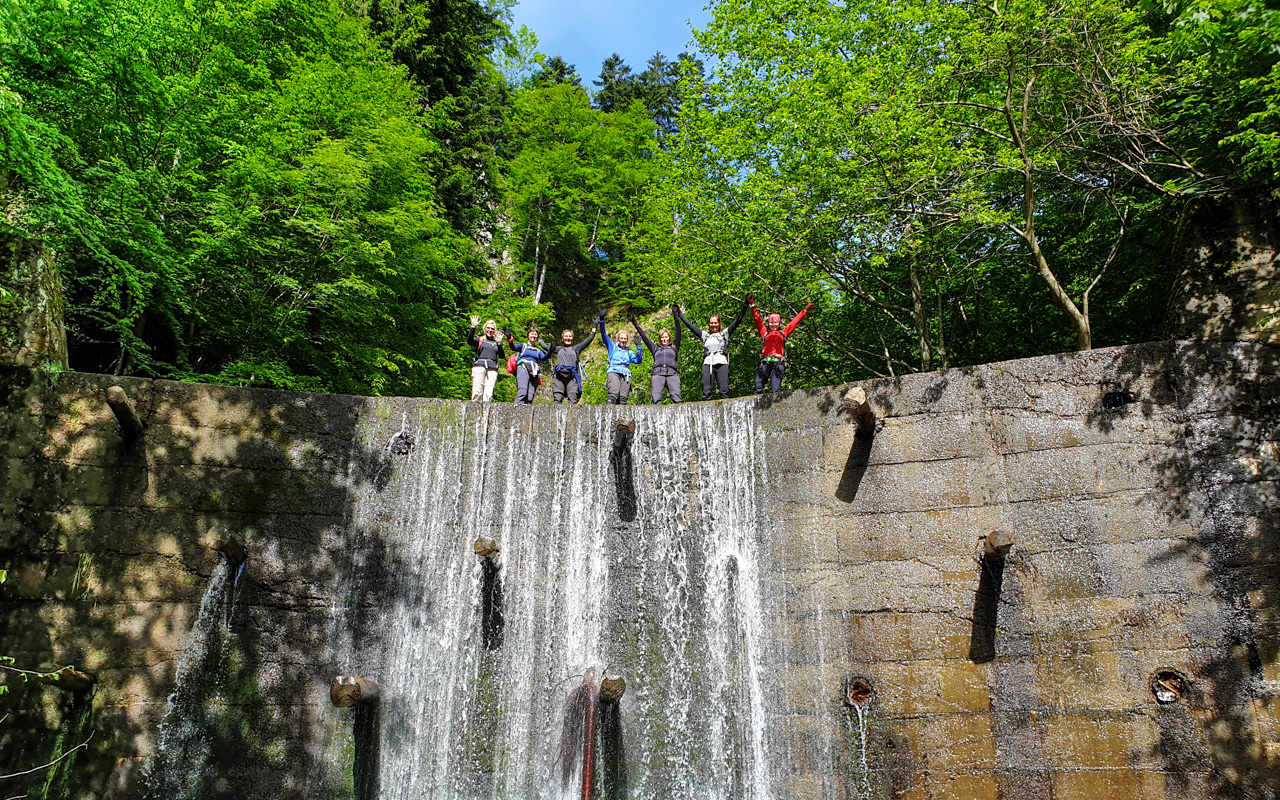 To conquer this canyon, you have to climb the rocks, using the stairs, metal supports, and the chains set in the rock. The cliffs of Stan’s Valleyare gorgeously sculpted by water. It’s amazing how this route can be so close to the key areas of natural phenomena.

The charm of the route is given by the multitude of stairs that help you step forward and overcome the huge rocks, cables and metal bridges that allow you to cross the waterfalls from one side to the other. At the same time, walking over the small lakes makes you feel like a great climber, all in a wild natural setting, with dreamy images, steep hills, and sharp cliffs.

Starting from Bucharest to Vidraru, you get to one of the most beautiful roads in the world. Stan’s Valley starts at a low altitude, so driving up on Transfagarasan takes quite a bit, just as it passes through the ruins of Poienari Citadel. In the first curve where there are parking spaces is placed the indicator that signals the beginning of the route. 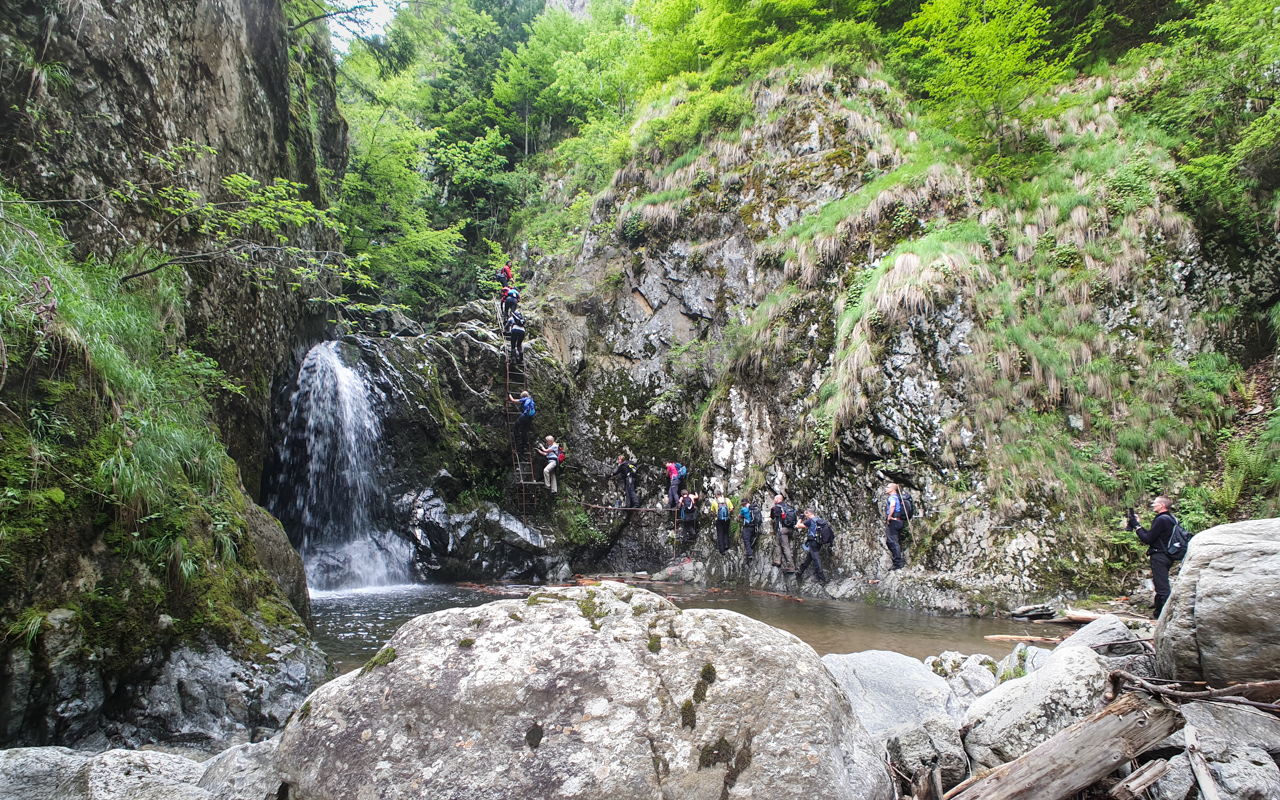 Getting up through the Stan Valley Canyon takes a few hours. But the time spent here is formidable because you have the chance to discover nature in all its splendor. This hiking trail is of medium difficulty. It involves climbing stairs and rocks, and a steep climb through the forest before reaching Transfagarasan. 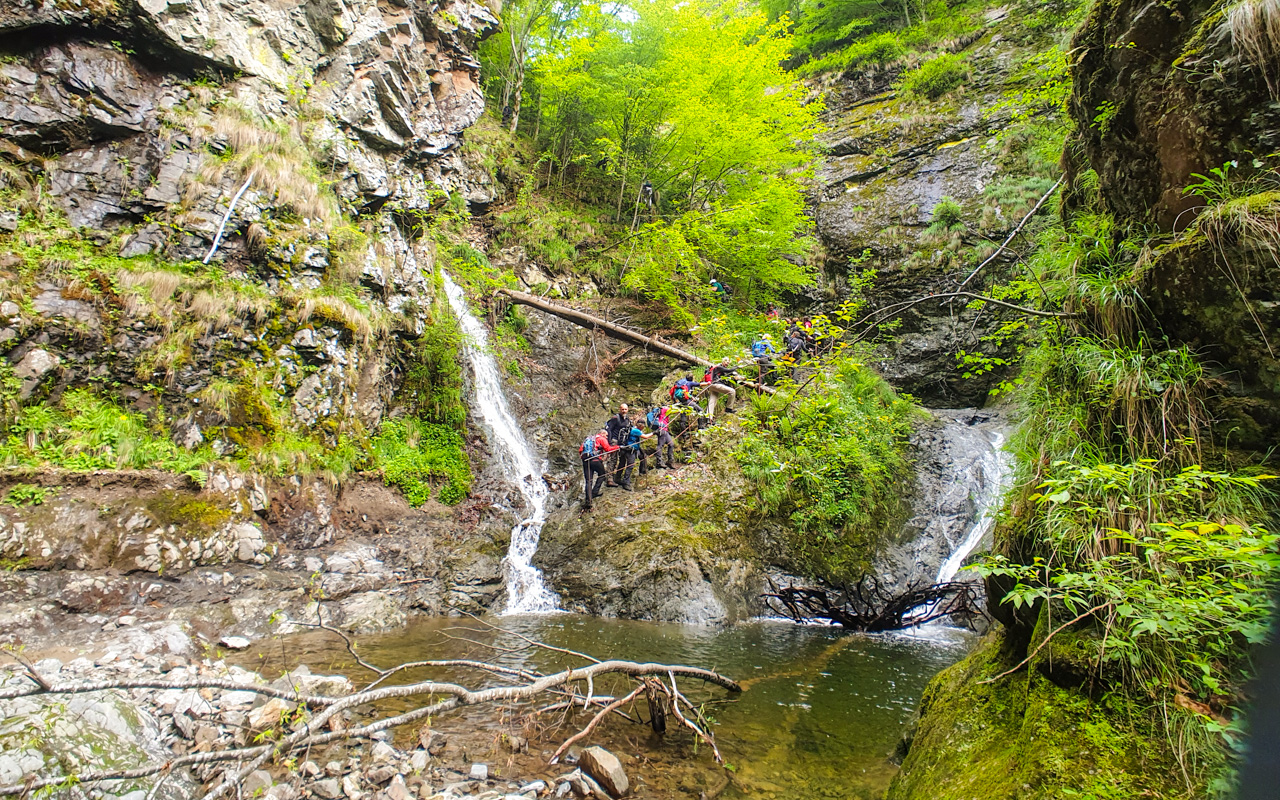 First, hiking enthusiasts must follow the valley line up to a succession of stairs. Rock, vegetation and water best describe this portion. You will be surrounded by many waterfalls, it is impressive how many natural beauties you can see in such a small area. On one side and another of the creek, advancing is done almost permanently with metal fittings and alongside waterfalls, you will also come across with water meshes. After the first vertical stairs, you’ll already think about what’s going to catch up with your route. Growing in altitude, you can enjoy amazing steps and passages. From here begins the most spectacular part of the canyon, with a climbing area, metal ladders, footbridges and supporting cables on the rocky walls, which also offer a certain amount of adrenaline. In this area, the footwear will play a very important role, not to slip into wet areas. Portions of a lateral climb, suspended crossings, solitary cliffs, the route are varied and exotic. After the last pass suspended over a water eye, it follows a slippery passage, ending with a crossing through the river. 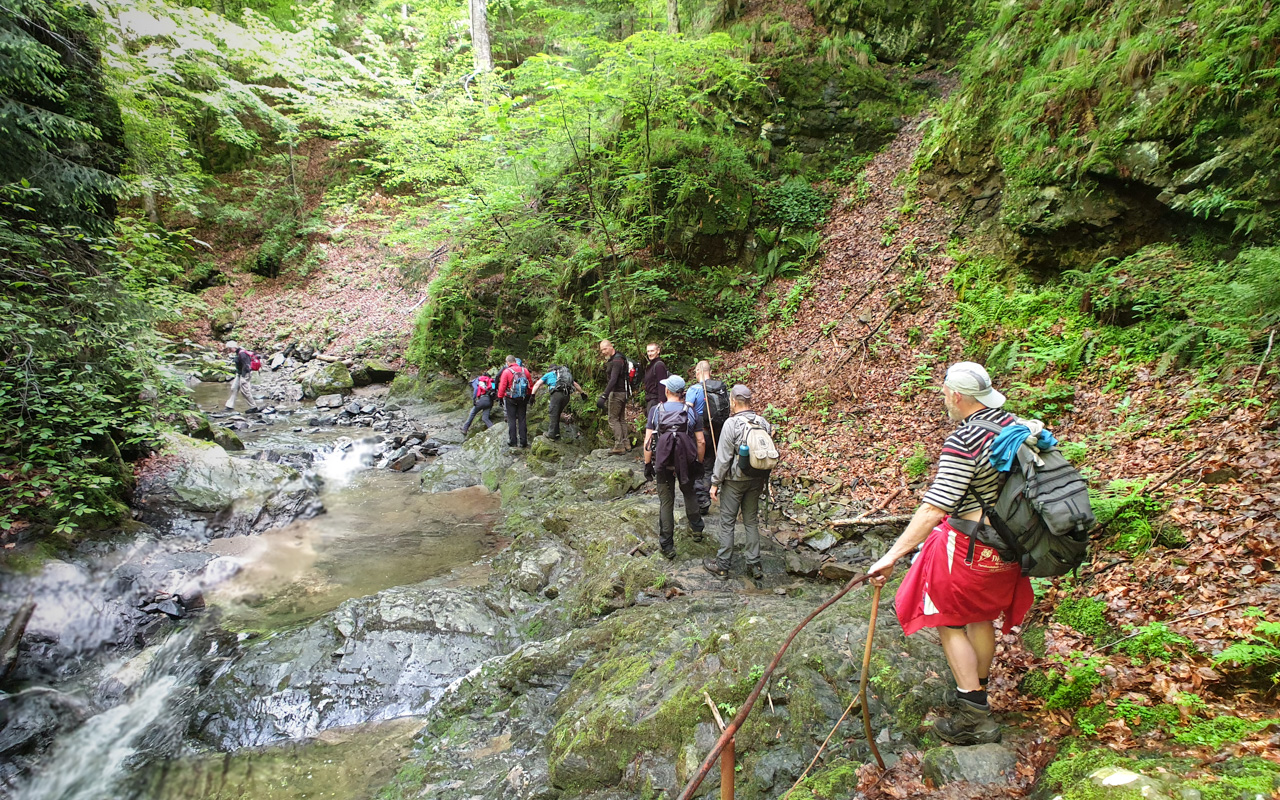 After a few hours of walking, climbing staircases, holding cables, admiring cascades and vertical walls, you get close to the end of the valley. Once you have left the rocks behind, climbing continues through a beech forest, reaching Calugarita Glade and then, the shore of Lake Vidraru. A green and quiet place, just right for relaxing after all adrenaline. Continuing along the lakeshores you will reach Vidraru Dam from where you get down to Transfăgărăşan to the point where you started the route.

The Transfagarasan route is one of the most popular in Romania, and even in Europe, due to its height, superb landscapes and numerous serpentines. The road is spectacular because it crosses the Fagaras Mountains, the highest in Romania. It stretches over a length of 92 kilometers and unites two different regions of Romania, Muntenia, and Transylvania.

The Transfagarasan reaches an altitude of 2042 meters and among the most popular tourist attractions is the Vidraru Dam. Here you can also find Lake Vidraru, one of the largest artificial lakes in Romania. The construction of the Vidraru Dam lasted five and a half years starting in 1960. At the inauguration, Vidraru Dam was the fifth in Europe and the ninth in the world. As the experts say, it is a double-bend barrier with a height of 166.6 meters and a crest length of 307 meters. At night, the contour is electrically lit, so it can be seen from the plane. The lake and dam are at an altitude of 830 m and is one of the most representative areas in Romania for extreme sports. Here is installed the highest point of bungee jumping in Romania, with a drop of 166 meters. If you want to discover the most spectacular canyon set up in Romania, you need mountain equipment, a camera and the desire to have fun. The steps will take you for several hours, over footbridges, thresholds, and stairs fixed directly into the rock, through places where water has carved a real wonder of nature. If you are passionate about the mountain tours, Stan’s Valley will be on the list of your favorite trails, being a combination of impressive landscapes, wild nature, and adventure route. 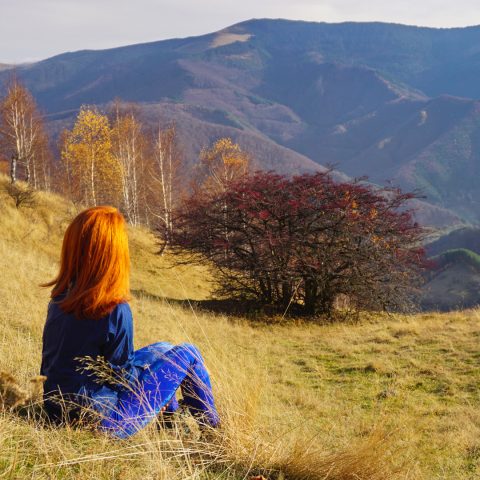 
3 Comments On Hiking the spectacular canyon of Transfagarasan

I had no idea such a picturesque place existed until I came across your post. Transfagarasan appears to be incredibly refreshing. Look at those wonderful greenery-draped cascades! It appears to be a terrific thrill-seeking journey for adventure lovers.

Amazing! I know nothing about traveling all over the country, what a wonderful looking place to explore.

Thank you George,
You can visit Transylvania together wit Hungary or Ukraine or Serbia and Bulgaria. If you already visited this places or there is no interest on that you can take the plane.
Best regards,