How to travel to Plovdiv, starting from Bucharest 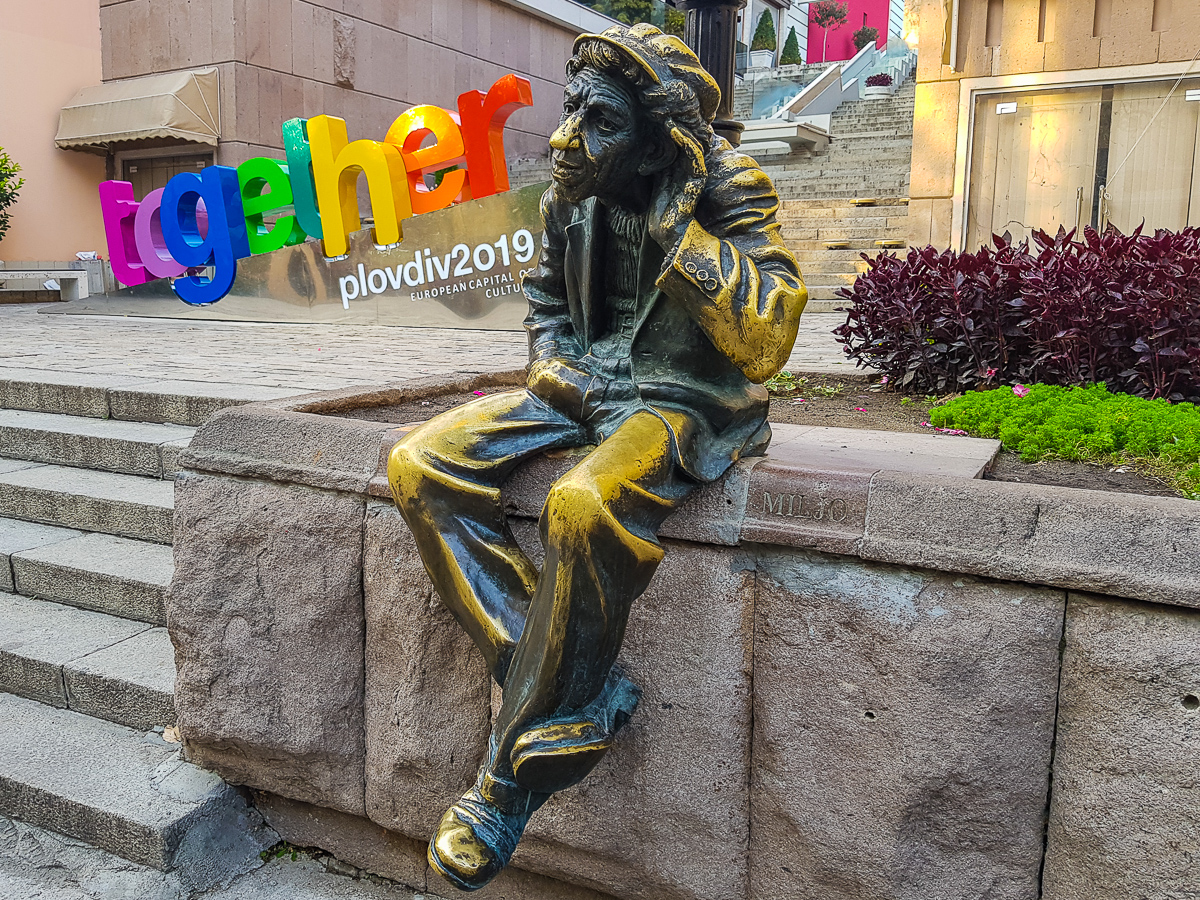 A tour to Plovdiv, from Bucharest, is a great opportunity to explore two different Eastern Europe countries. Plovdiv is one of the oldest cities in the world with a history that is visible all over the place, architecture and buildings that reflect the city’s past. An important center of Thracian civilization, Plovdiv continued to develop under Roman, Byzantine, and later Ottoman occupation, becoming a prosperous city. 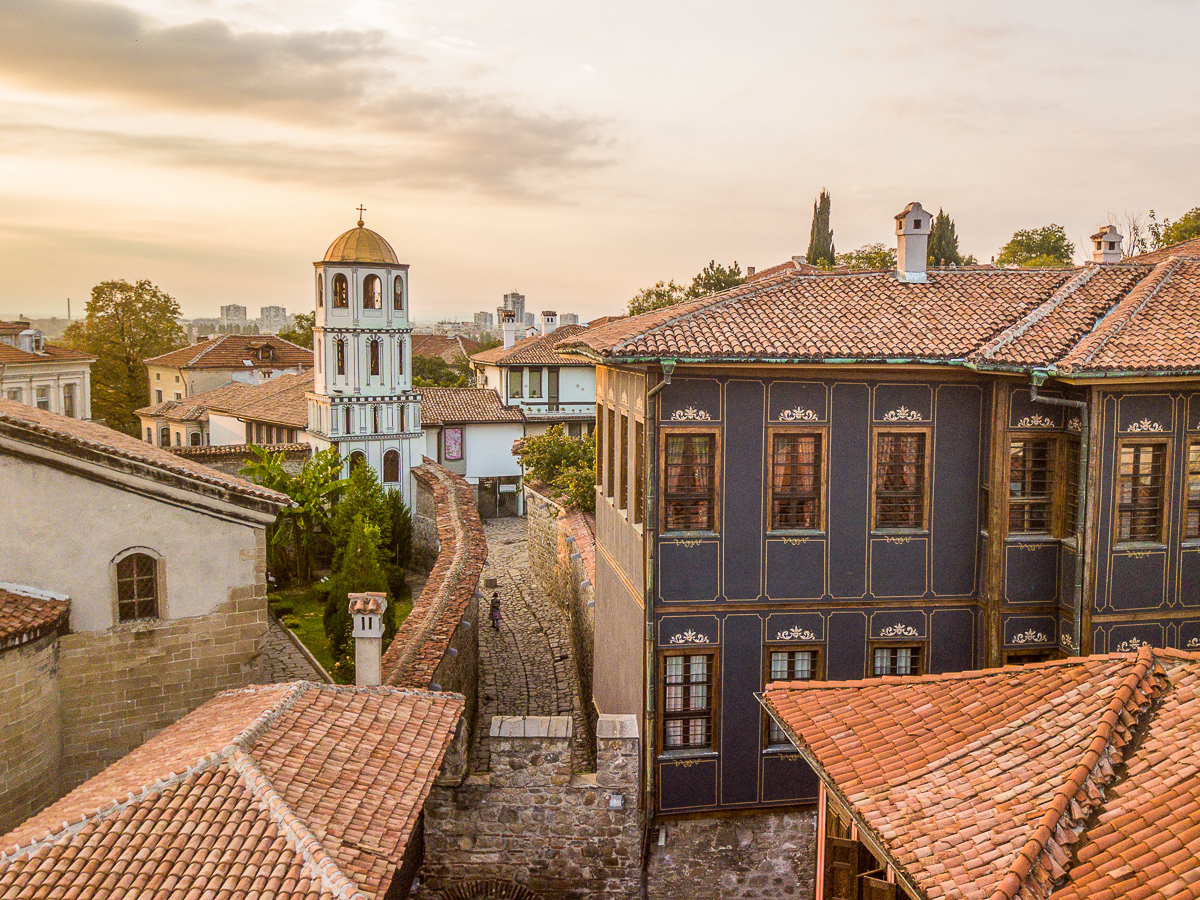 Plovdiv was originally set on seven hills. Unfortunately, one of them was destroyed at the beginning of the 20th century, being turned into material used to pave the streets of the city. However, the title of “town on seven hills” remains, and both tourists and locals can still enjoy an escape into these six oases of greenery. At the same time, it offers many good promenade places, with much of its pedestrian area paved with river stones.

Plovdiv – European Capital of Culture in 2019

In 2019, Plovdiv, the largest and most important city in the historical region of Thrace, is one of the two European cultural capitals. Europe is thus invited for one year to Plovdiv, one of the European cultural capitals, alongside Matera (Italy). It is the first time Bulgaria enjoys such an opportunity, and the fact that Plovdiv imposed ahead of the competition, including the Bulgarian capital, Sofia, is due to impressive characteristics, rich history, and well-preserved architecture. It seems to have triumphed the city of the seven historic hills, where there are traces of Thracian, Greek, Roman, and Ottoman; the history and cultural significance is also provided by the historical Ancient Theater in the center.

So, throughout the year, the rest of Europe can meet Plovdiv. The region will benefit from new opportunities, and the city will enjoy a complete program that has the motto “Together”. According to mayor Ivan Totev, choosing this motto should include especially the similarities between religions and ethnic groups, respectively the millennial history of Plovdiv. 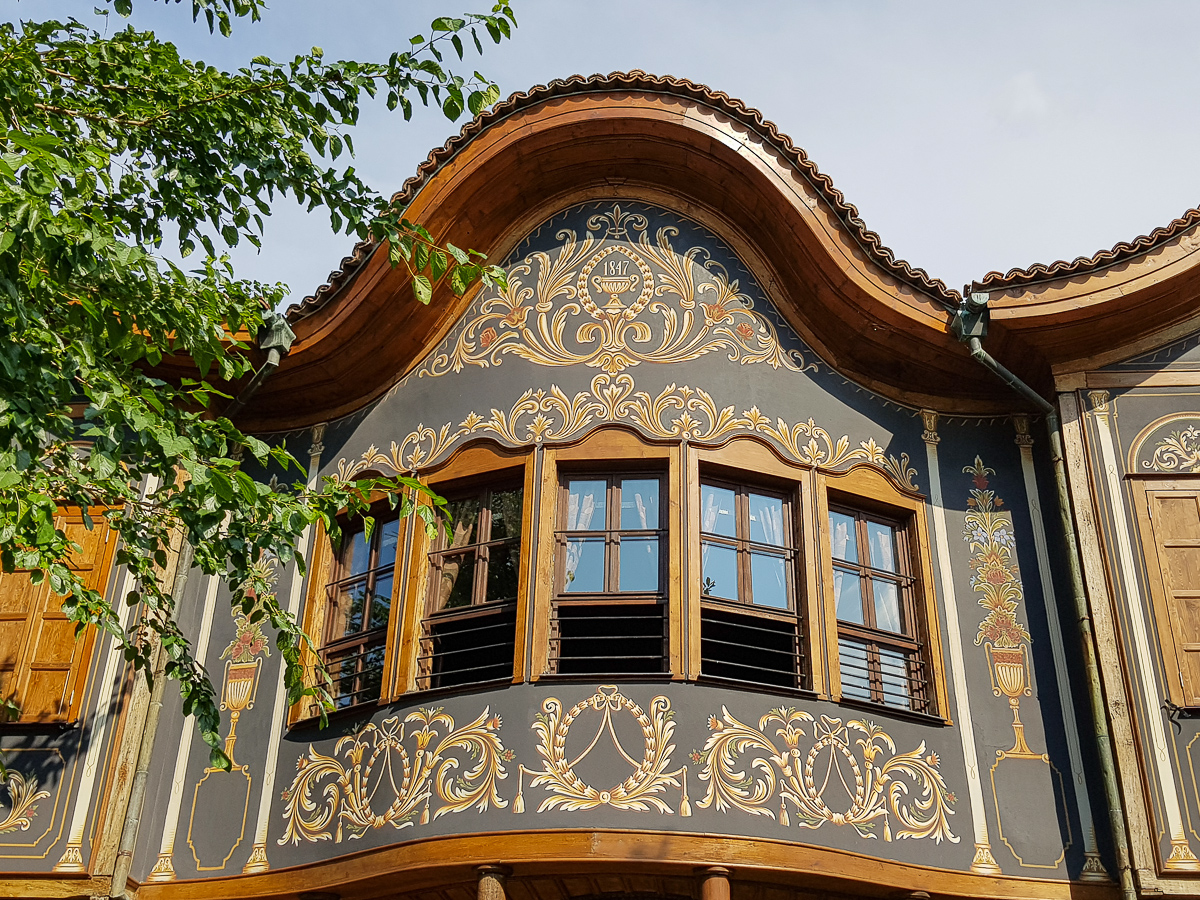 More than 300 projects have been organized in Plovdiv as well as in the central and southern regions of Bulgaria, as well as in Varna, Sofia and Veliko Tarnovo. Projects include community-based festivals and projects, structured around themes related to the characteristics of Plovdiv, its history and cultural heritage, as well as the challenges faced by the city. Visiting Plovdiv, you’ll take part in a wide range of activities, from discovering Cyrillic through numerous exhibitions and ending with theatrical productions with Western communities. 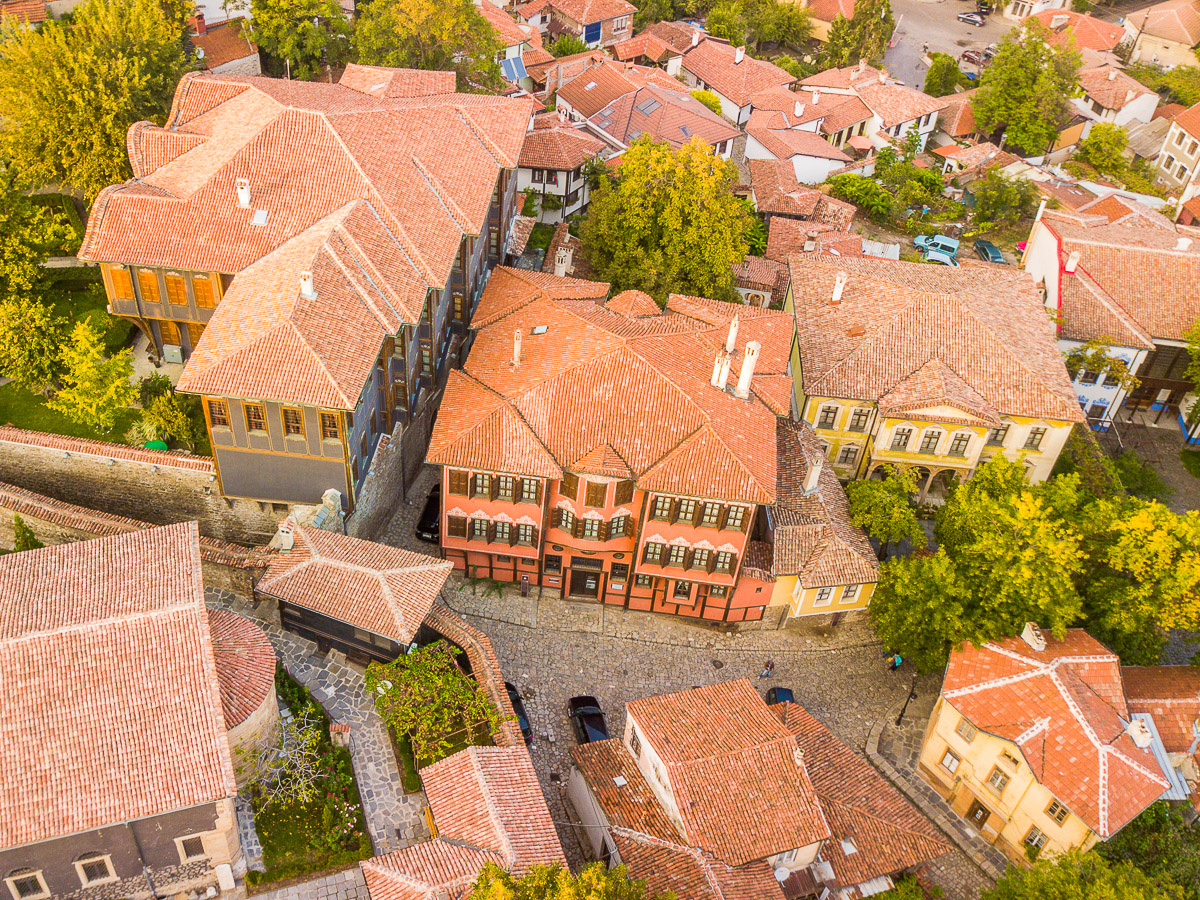 Trip to Plovdiv from Bucharest

The first stop of the tour from Bucharest to Plovdiv should be the area of Rusenski Lom River. Here, the main tourist attractions will delight the passionate hikers, wild trails, who will find the necessary guidelines for enjoying the less traveled paths. The Ivanovo rock churches, built through stone carving remind of the historical value of the places. The cave settlements were inhabited until the 17th century. In this place, you can admire the very well preserved wall paintings of the 14th century. The frescoes tell a lot, not only about the Bulgarian people’s beliefs but also about its history, some portraits depicting Ivan Alexander and John Asan II. In 1979, the valuable monuments became part of the UNESCO World Heritage.

After enjoying the spectacular rock churches, you can get to Veliko Tarnovo, an important tourist destination of Bulgaria, where we can visit the main attraction, Tsarevets medieval fortress, the former residence of the Second Bulgarian Kingdom sovereigns. Stretched over an area of 12 hectares, the city is a veritable fortress with massive stone walls, imposing entrance gates and defense towers. 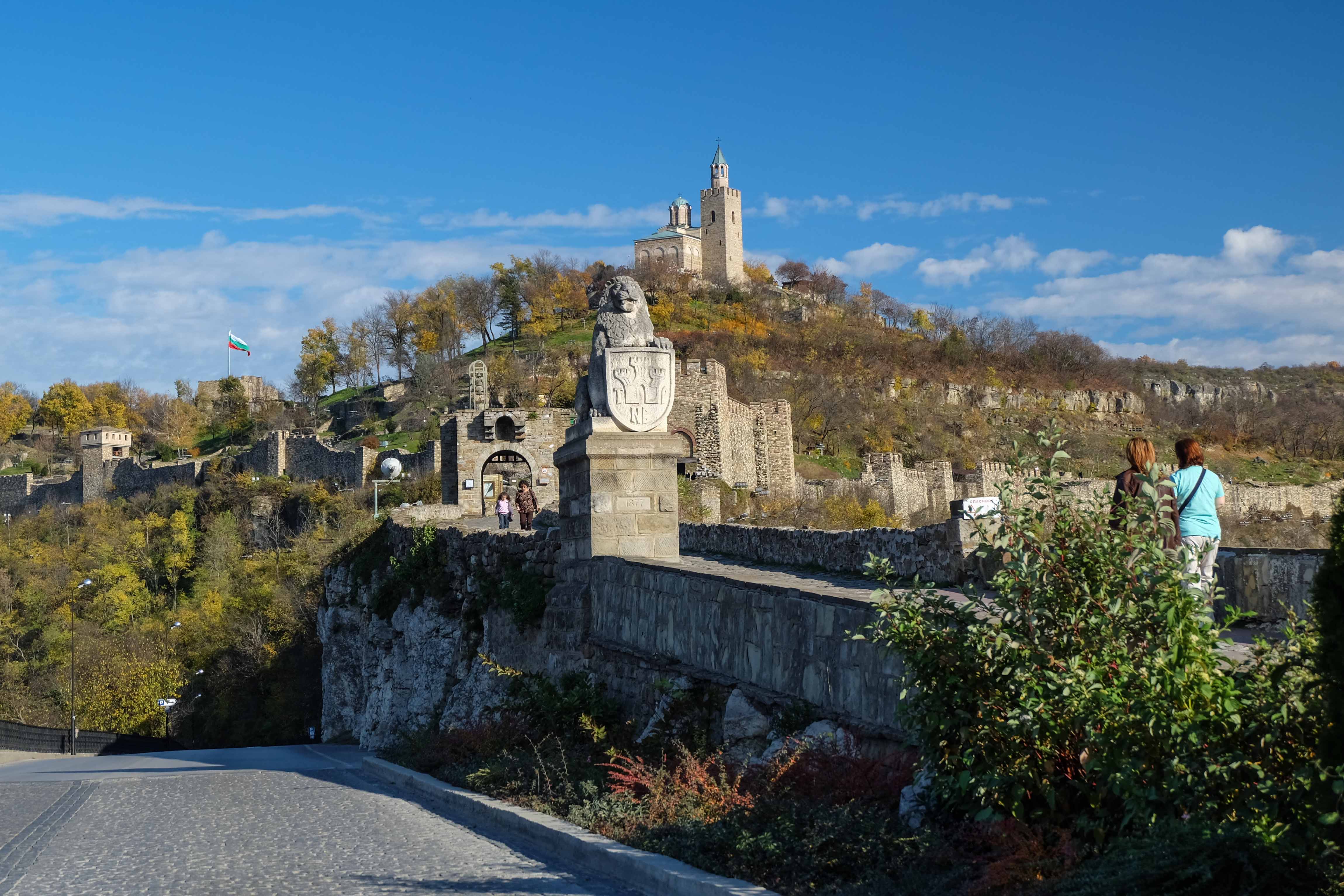 The next day you can dedicate it to the European capital of culture 2019, the city of Plovdiv. Probably the most spectacular tourist destination in Plovdiv is the Ancient Theater, a wonderful building from the 2nd century that comes into your way when you expect less. It’s so imposing beside the cottages with Ottoman-style wooden balconies, and the panorama to the scene is so wide beside the narrow and cobbled stone streets that it seems almost unreal. As in all the Roman theaters that have been preserved, and here the acoustics are very good also. So, on the stage of the Ancient Theater, there are still many performances. Check the list of events to be held in 2019 from May to September. It will surely be a memorable experience!

If you want to take advantage of this region as much as possible, you can visit also the Rila Monastery, known throughout the world, and can not be missed when speaking of the great monuments of Eastern Europe.

Founded in the 10th century, the Rila Monastery is regarded as one of Bulgaria’s most important cultural, historical and architectural monuments. It is located in the northwest of the Rila Mountains at an altitude of 1147 meters and in 1983 became part of the UNESCO World Heritage. The central church of the Rila Monastery is unique throughout Balkan space, the architectural style of the monastery being similar to the great Athenian monasteries. The exterior of the complex, with high stone walls and small windows, resembles a fortress rather than a monastery.

In this area are the most beautiful and interesting houses in the medieval town, old churches and one of the best preserved Roman amphitheaters in Europe.

Located between the Balkan and Rhodope Mountains and situated on both banks of the Maritsa River, Plovdiv survived thousands of years the two worlds of Europe and the Orient, becoming an important border fortress of the Byzantine Empire. The archaeological evidence dates back to the Thracian times, Greek, Roman, Byzantine, and Ottoman, counting no less than 6,000 years of history, continuously inhabited between seven hills. Due to its location and assimilation capacity, this Balkan city is also recognized for its ethnic diversity, with many of its inhabitants belonging to Turkish, Armenian, Greek and Jewish minorities, their influence leading in vibrant cultural wealth. 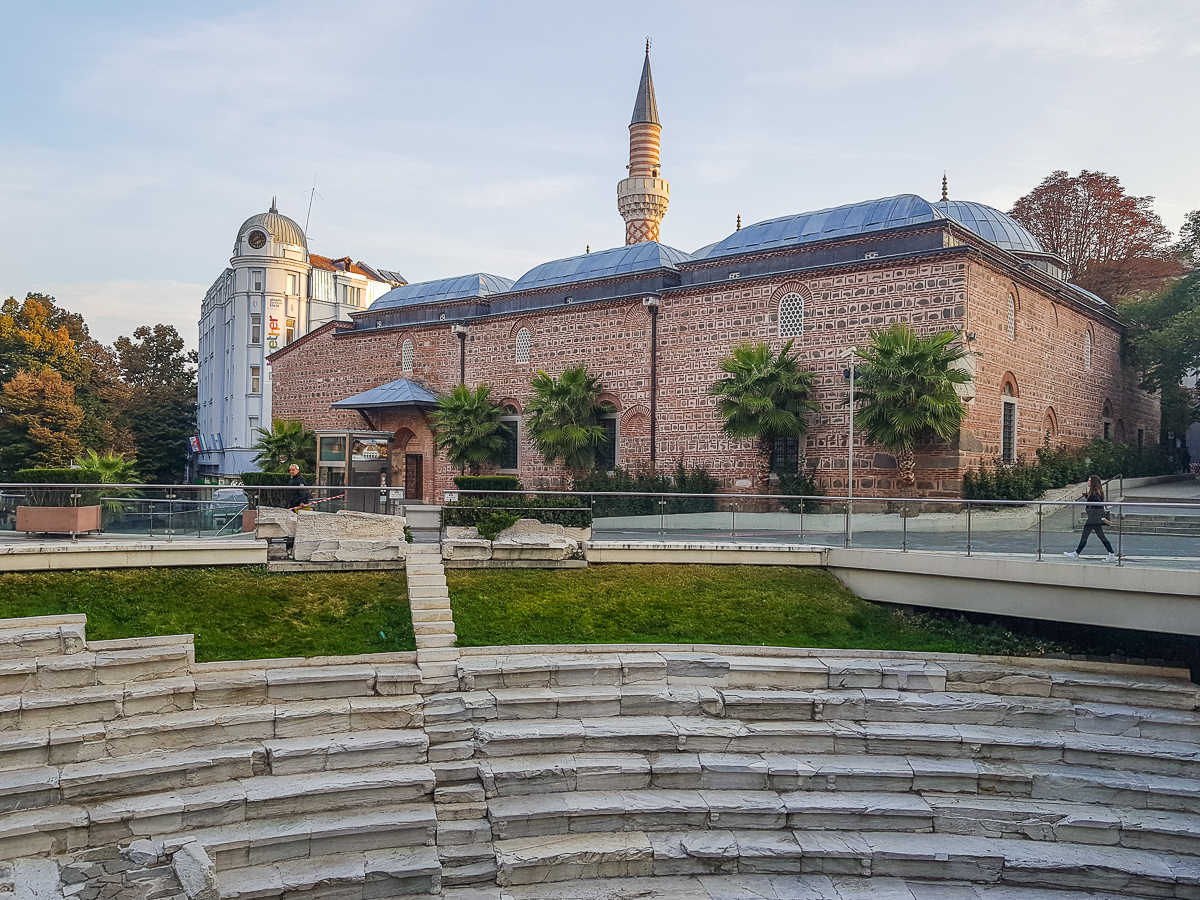 Besides the famous Ancient Theater, while walking on the main pedestrian street in the Old Center, you can see the Roman stadium that is now below the street level. Much of it is still buried under the city today, only a small part is revealed to the public. On the cultural life of Bulgaria, we can say that it is manifested through the art galleries or concert halls of the city.

Plovdiv is located on the hills and, beyond the charm of streets that go up and down on each peak surprises await you. One of them is Nebet Tepe – the place where Plovdiv’s history began to be written. That was back thousands of years when there has developed one of the largest Thracian city in Bulgaria, which later, after being conquered by Philip the 2nd of Macedonia (father of Alexander the Great) was called Philippopolis. The view is fantastic: you can see the mosques in the city, the red roofs of the antique houses and the green hills around.

Plovdiv is an active city with lively nightlife, supported both by artists and by the public. An important part of this culture is the Kapana area, a special district, an artistic bohemian place, where the artisans gather together. The Kapana creative District is an ambitious project that aims to have galleries, artisan boutiques, and creative workshops. 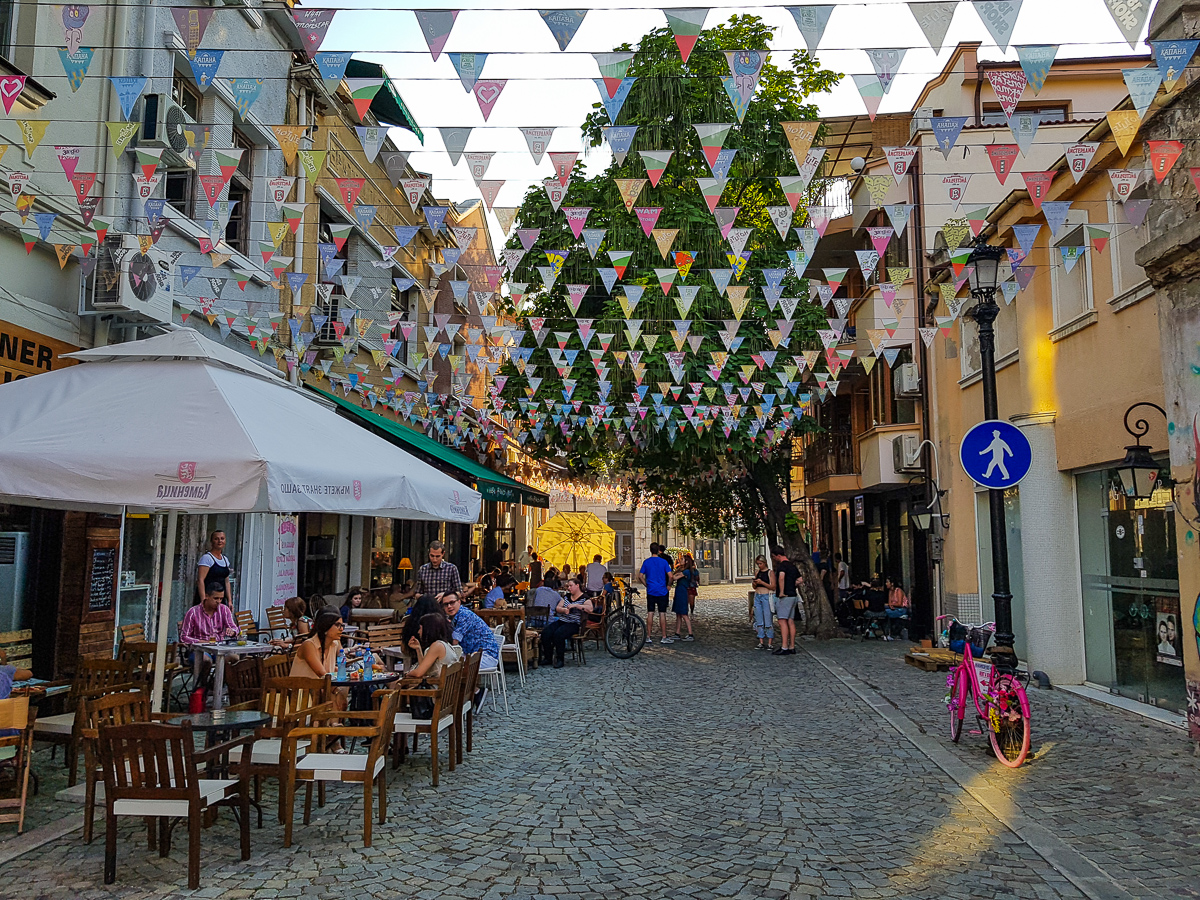 Another way of knowing Plovdiv is at a Bulgarian party with national specialties and varied food. Also, Thracians passion for wine has been preserved to this day, and in Plovdiv, you will find plenty of wineries where you can taste the different varieties, cast directly from the barrels.

If you made an idea about this urban charm, prepare for your trip and let yourself be enchanted by the old town of southern Bulgaria!