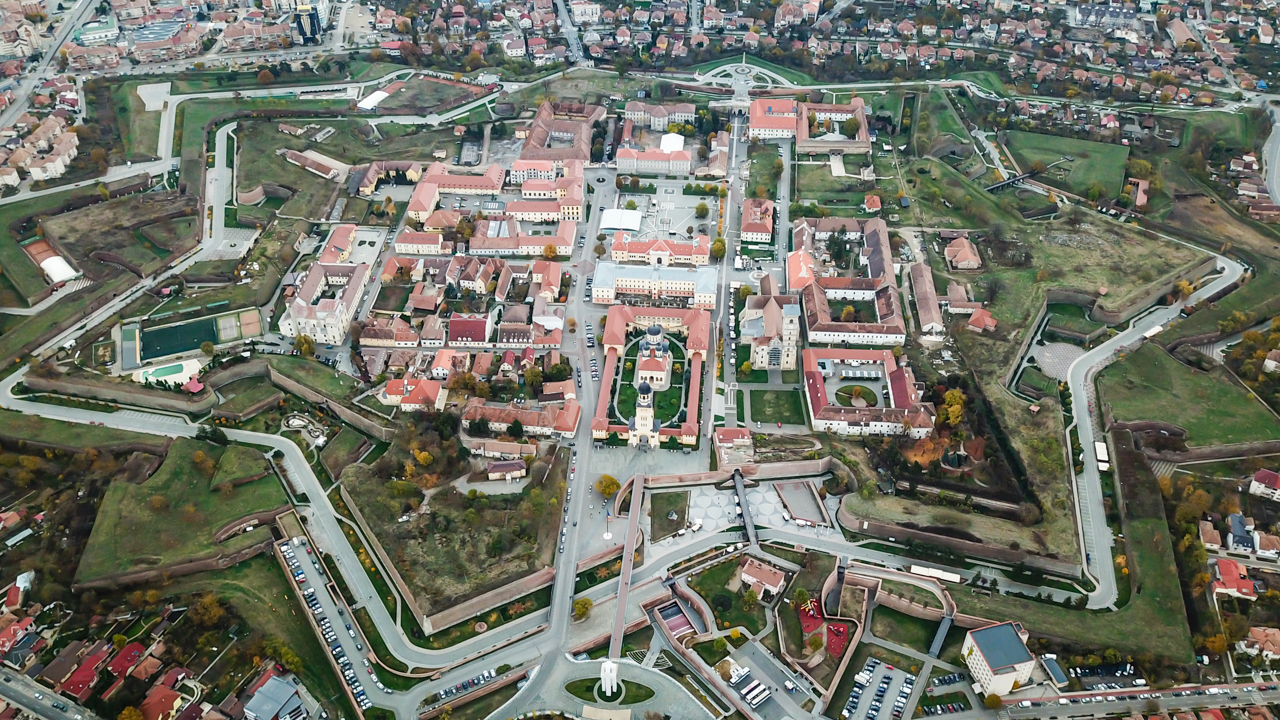 Alba Iulia is situated in the west-central part of Romania, being a truly spiritual and cultural center of Transylvania. There is no other city that better highlight the ideals of unity and identity of the Romanians over the centuries.

The Alba Iulia bastion fortress, called Alba Carolina, is the perfect place where you can go back in time, over two millennia, among the vestiges of three fortifications, in so many different epochs.

In Europe, there are few Vauban fortresses, and Alba Carolina is one of them (“Vauban” refers to the systems designed by Sébastien Le Prestre, Marchiz de Vauban, the architect, and the French military who launched at that time a new system of fortifications in Europe). 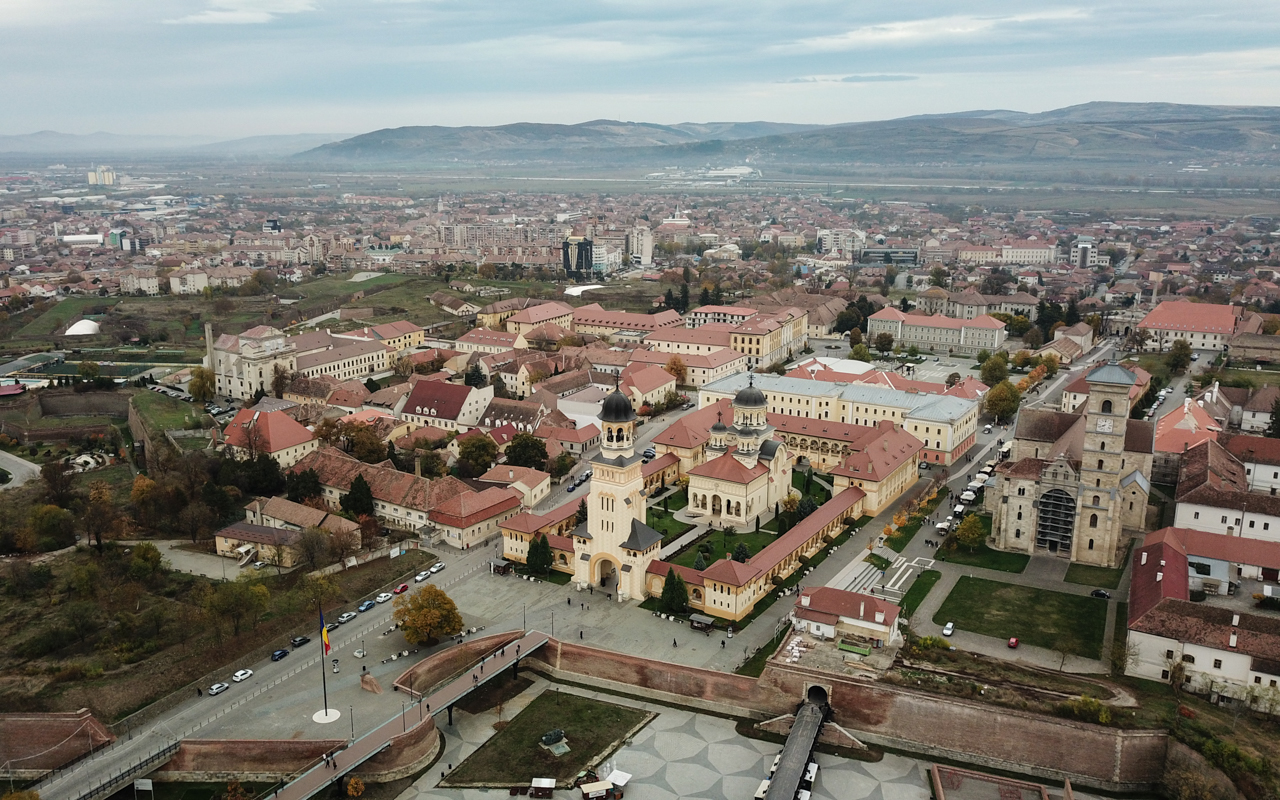 The construction of such a fortification required huge efforts from both humanly and financially is the largest and most valuable fortress in south-eastern Europe and was built in the first half of the 18th. The construction lasted not less than 23 years.

It is star-shaped with seven bastions and thick brick walls, surrounded by two rows of defense ditches, which is why the Alba Carolina has preserved the title of the most impressive fortress in south-eastern Europe until today. Alba Iulia was considered one of the largest and most important urban centers ever since Roman times.

The role of the Citadel was a military defense one, given by the bastion system, the typology of the artillery pieces that it was endowed with, and the size of the existing troops inside it. The city was attacked once in its military existence but never conquered.

After 2010, the fortress began to be restored, the western side of the historic center being, by the way, the most spectacular restoration project of the fortress.   Neither its exceptional cultural heritage was not forgotten. Thus, the fortification is the place where cultural festivals take place and where you can attend the concerts of famous orchestras or top Romanian and foreign artists.

The city of Alba Iulia is a true chapter in the history of Romania. Besides the Alba Carolina Fortress, at least 4 other locations are proof of this history, making the city one of the most important tourist attractions: National Museum of the Union, Reformation Cathedral, Palace of Principles and Roman Catholic Cathedral.

The National Museum of Unification

Today, you can see within the museum nearly 200,000 heritage objects and one of the most valuable documentary libraries in the country. The statue of Hercules is kept in the halls of this museum after it was discovered in Alba Iulia.

The construction of the Coronation Cathedral in Alba Iulia is linked to two important moments in the Romanians history that took place here. The first one reminds of the former Metropolitan building built in 1597 by Michael the Brave, and the second by the crowning of King Ferdinand and Queen Maria in 1922, as sovereigns of Great Romania.

Symbol of the union of Transylvania with the rest of Romania, the cathedral simply dominates the city with its towers of nearly 60 meters, providing a great perspective on the Roman Plateau – the place where almost one hundred thousand Romanians witnessed the Great Union, more than 100 years ago.

This cathedral is part of the monuments created by the Romanian School of Architecture, founded by the architect Ion Mincu. In the narthex of the cathedral are painted the portraits of Mihai Viteazul and Lady Stanca.

This cathedral is one of the most visited tourist attractions in the city, being the most preserved medieval sacred vestige in Central Europe. From an architectural perspective, the edifice encompasses all styles used between the centuries X-XVIII: Romanesque, Gothic, Renaissance and Baroque. Built 800 years ago, it is the oldest cathedral in Transylvania that continues to function, and also the oldest building in Alba Iulia. 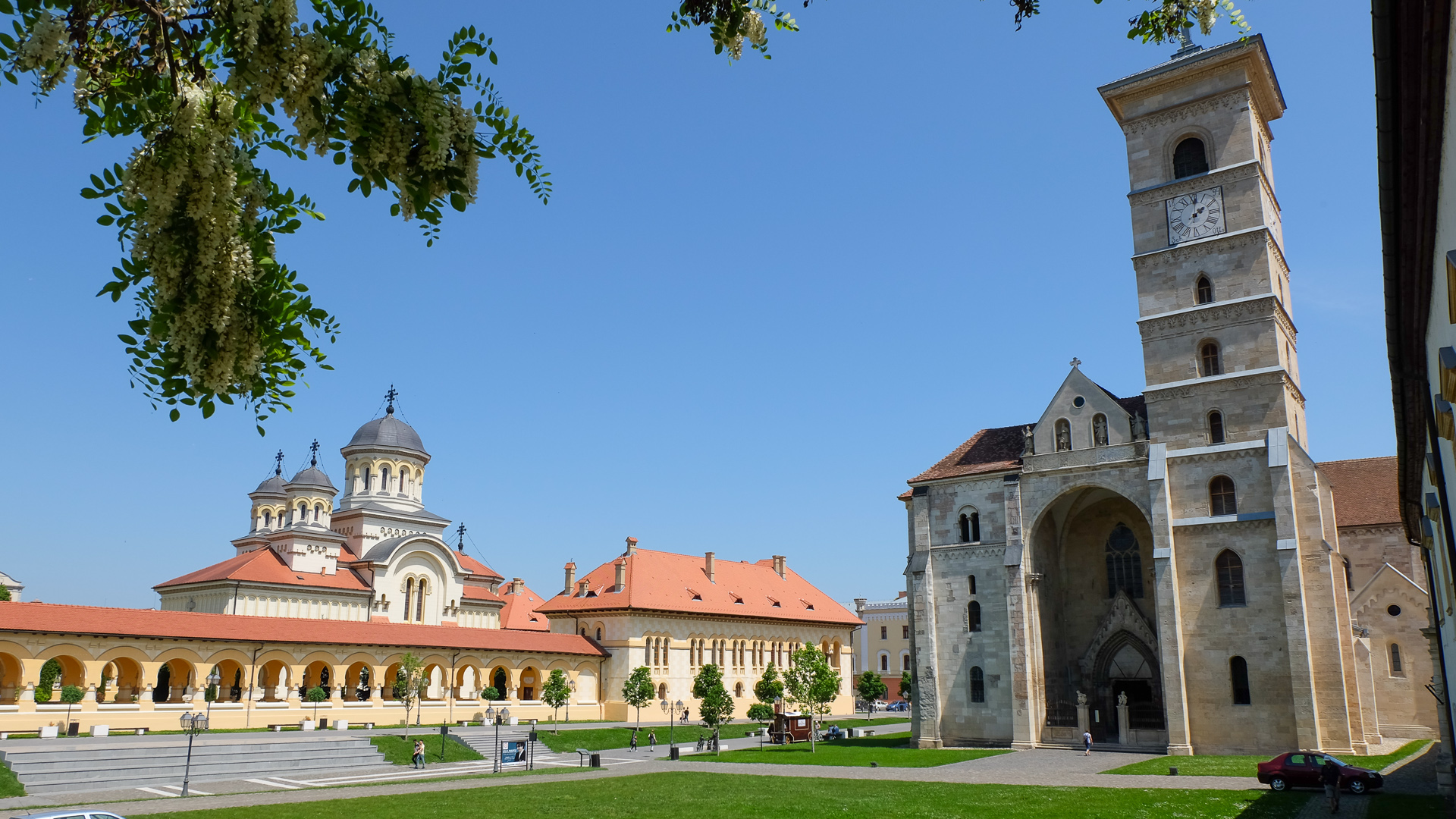 Inside the cathedral, there are the funerary monuments of Iancu de Hunedoara and his son, as well as the sarcophagi of the Zapolya family (Izabella and Ioan Sigismund, the first prince of Transylvania).

Historians say that the cathedral was built on the site of an older church. The archaeological excavations have revealed the ruins of a trinitarian basilica built in the 11th century, of which today only a strip is kept from its floor.

Built in the fifteenth century, the Princely Palace is considered by the specialists the most important administrative building in Transylvania and combines several architectural styles: Gothic, Renaissance and Baroque. This palace, like many other monuments in the Alba Carolina Fortress, has a long history linked to personalities and outstanding events in the history of Transylvania and even Europe. The edifice lived its glory in the Transylvanian Principality when, for more than 200 years, the fate of the region was headed from Alba Iulia. It is the place where the history of the Transylvanian Principality can be presented on the basis of historical documents, maps, plans, models, genealogical trees of the princely dynasties, as well as objects of art and decorative art from the 16th to the 18th centuries.

According to historians involved in research of the Palace, it brings to public attention at least 200 years of Transylvania history.

From the capital of the Great Union to the cultural capital

Only 70 km from Alba Iulia is located Sibiu, a true European capital of culture, with a medieval air, through the beautiful surroundings, local food and traditions, and the charming pedestrian center. Visiting Sibiu gives you the opportunity to discover a city with cultural and tourist objectives at every step. The city has a history of over 900 years with walls and towers, public buildings and historical squares, all part of Romania’s largest medieval ensemble. 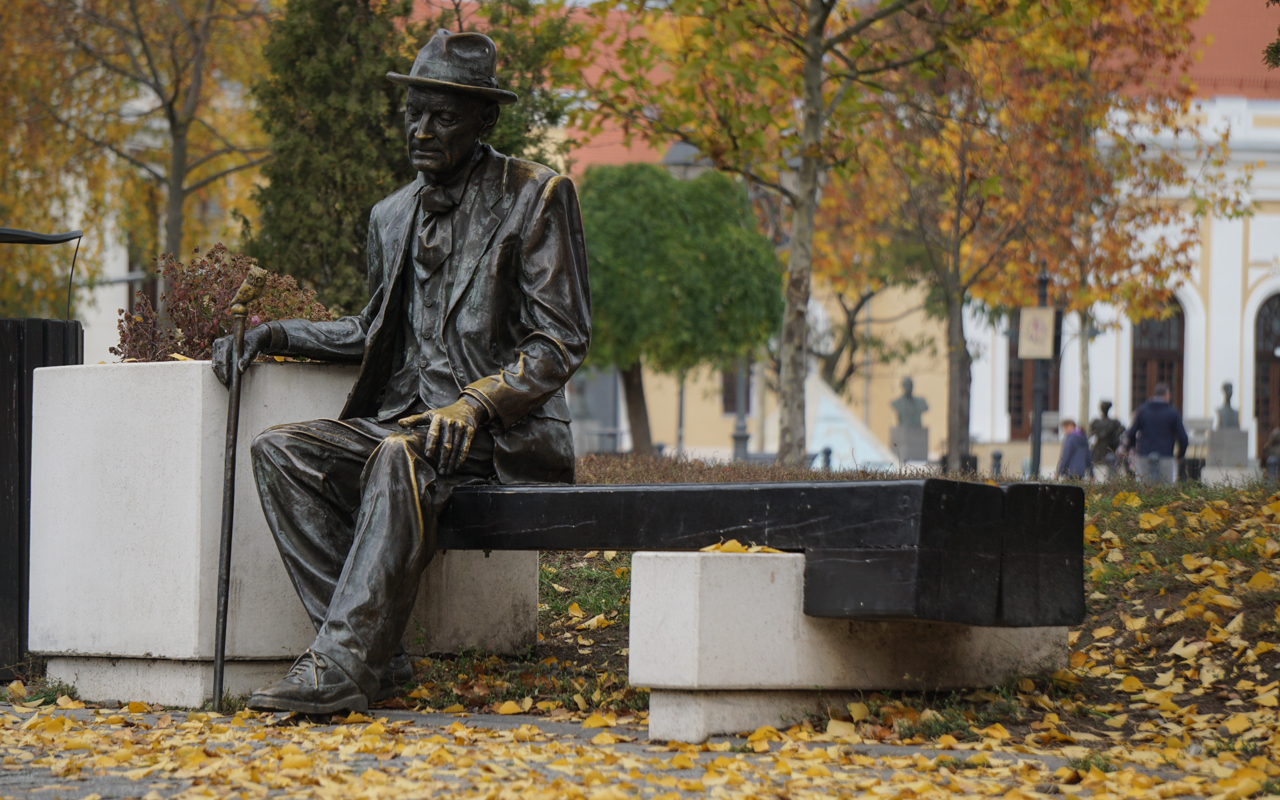 Also, Sibiu hosts the International Theater Festival every year. The 10 days of the FITS are an explosion of music and color on the streets of Sibiu, filled with people fascinated by theatrical performances from around the world. In 2019, the festival will take place from June 14th to 23rd and includes 540 events with foreign guests from over 70 countries that will take place in 75 venues in Sibiu and its surroundings.

Also in 2019, Sibiu became European Gastronomic Region. During the year, it will be holding events where you have the opportunity to taste the gastronomic millenary tradition of the region as an expression of multiculturalism area.

If you have not been to Sibiu and Alba Iulia yet, you need to schedule a city break. If you’ve already been, I probably do not have to convince you that it’s obligatory to come back. And maybe even come across an interesting event, if there’s so much going on in those wonderful cities.