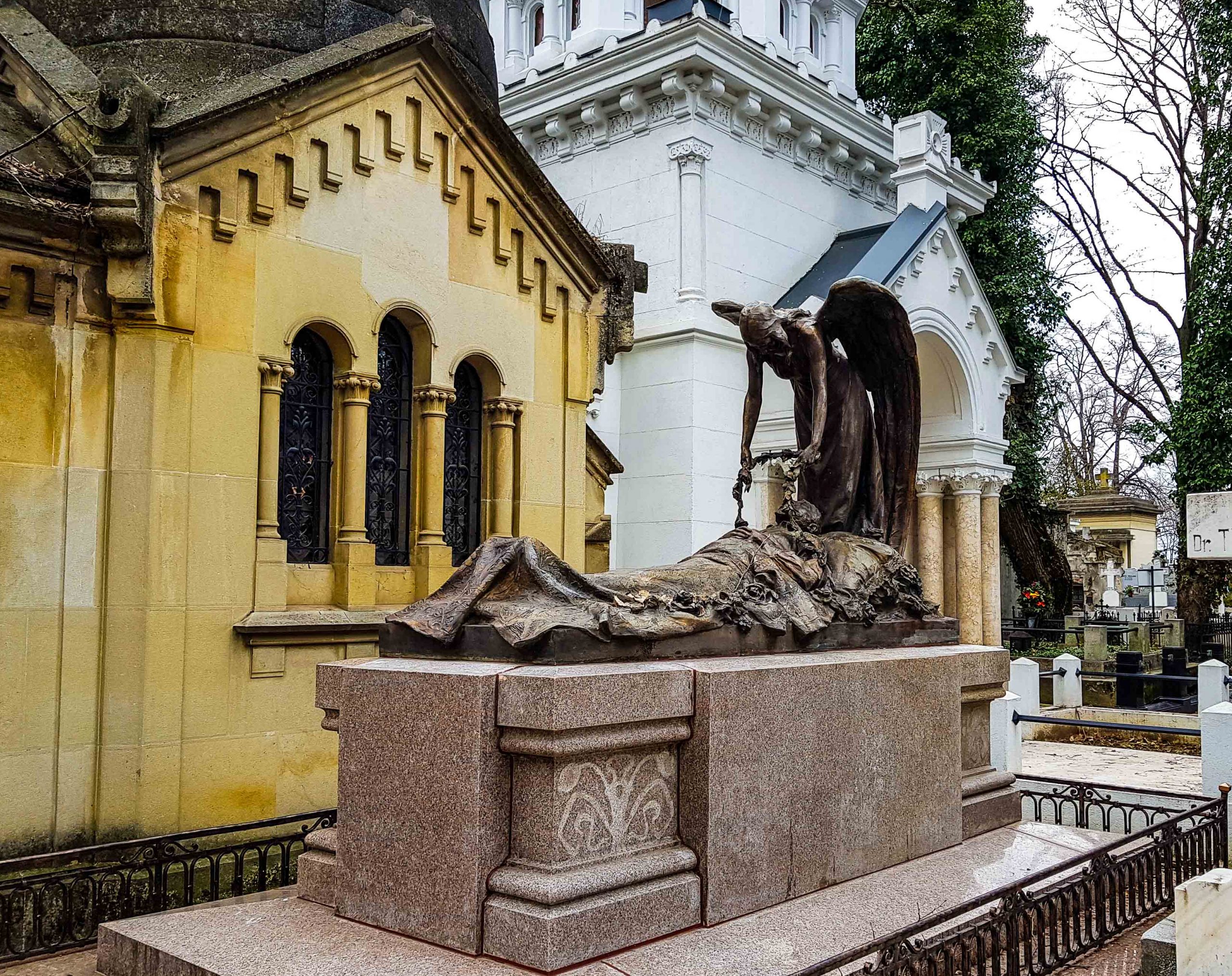 Besides its purely funeral function, the Bellu Cemetery is a museum of monuments of the 19th-century Romanian mortuary architecture and it’s worth a visiting you happen to spend some time in Bucharest. Especially if you like spooky places and stories from the past, then this is the right place for a short visit. The cemetery is full of monuments that are meant to tell the stories of those who found their final resting place here. From tragic love stories to monuments dedicated to some of the most important Romanian writers and artists, if you take the time, you can learn something new with each step you take.

The Bellu Cemetery is the largest cemetery in Bucharest and one of the best known in all of Romania, along with the Merry Cemetery from Sapanta. The Bucharest Cemetery is spread over a large area of land near Tineretului Park and was founded on the site donated to the city by Barbu Bellu in 1853, hence its name.

In the nineteenth t century, in 1821, the place where now the cemetery is hosted the nobility court and the great garden of Bellu the Old. By the 19th century, Bucharest had buried its deaths around countless churches, outside of the city, with only 7-8 cemeteries for the poor, for those in the prisons or the dead after the many plagues that took their toll on the city. As time passed by, the cemetery became a true art museum, famous architects, sculptors and stonemasons performing wonderful works that sheltered or evoked the buried personalities in the cemetery.

The Poroineanu family’s grave is easily recognizable after the statue made by Raffaello Romanelli that brings to life a scene of a Shakespearean tragedy, with a very old man sitting next to a dead young woman lying on a bed. They were a family of landowners in Caracal, and it is supposed that the statue would represent two brothers from the Poroineanu family who fell in love with each other but found out only afterward that they were related. Because they could not be together, they committed suicide, and after them, their father, Constantin Poroineanu, committed suicide. The monument is a reminder of their tragic love story which could have been avoided if their father wouldn’t have committed adultery. 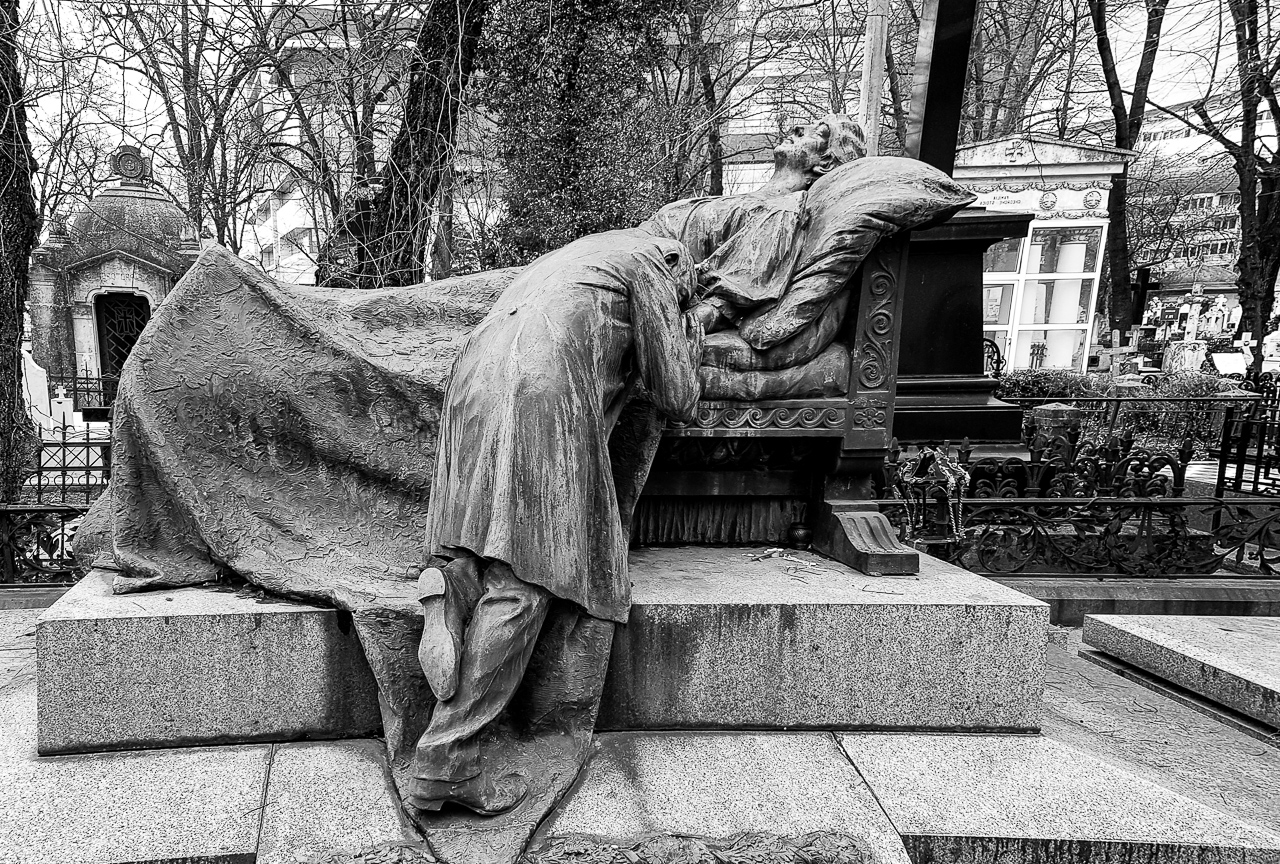 The first person buried in the Bellu Cemetery

Officially, funerals began in the Bellu cemetery only in 1859. At that time, the mayor of Bucharest, C.A. Rosetti, buried here his daughter, Elena, who died when she was only 3 years old. Her tomb does not exist anymore, but where her resting place was is now the cross of C.A. Rosetti, deceased in 1885 and the bust of Elisa Rosetti.

The strange pyramid from the Bellu Cemetery

Another funeral stone that is hard to miss is the strange pyramid that can be found at the tomb of Ioachim Pompilan. He was a painter who used to pain religious frescoes and the monument was created by the architect Luigi Orengo in 1897. Some say that the pyramid resembles the Egyptian pyramid from Giza, only darker, but no one knows why the painter chose this particular shape for his tombstone or if pyramids had a special significance for him or his family.

The mausoleum of the Gheorghieff brothers

This is a really impressive architectural monument, created by the famous Romanian architect Ion Mincu and decorated by the sculptor Frederick Storck. The Gheorghieff brothers, famous bankers in the nineteenth century, born south of the Danube in Bulgaria, partly financed the Independence War in Romania, borrowing Carol I, the first king of Romania with gold coins. Unfortunately, in the ’90s, the mausoleum was broken into and vandalized, as many other Bellu monuments and 4m high candlesticks were stolen, which almost triggered a diplomatic scandal between Romania and Bulgaria. Luckily, the mausoleum can still be seen from outside.

The lady with the umbrella

This is another monument that evokes a tragic love story. It’s a sculpture of an elegant lady portrayed in natural size at the edge of an alley. It’s one of the oldest statues in the cemetery, the work of the Italian sculptor Raffaello Romanelli. The lady was called Katalina Boschott and she was a Belgian young foreign language teacher who came to Romania to take care of the children of a doctor named Andrei Popovici. They fell in love and lived their relatively discreet adventure, which fueled rumors about the many relationships Katalina supposedly had with other personalities of the time. It’s said she was very beautiful and she liked to flirt with men. In the early 1900s, Katalina and Andrei went together to the Baile Herculane resort where the woman suffered from peritonitis, and it’s said that the failure of a doctor caused her death on the operating table. 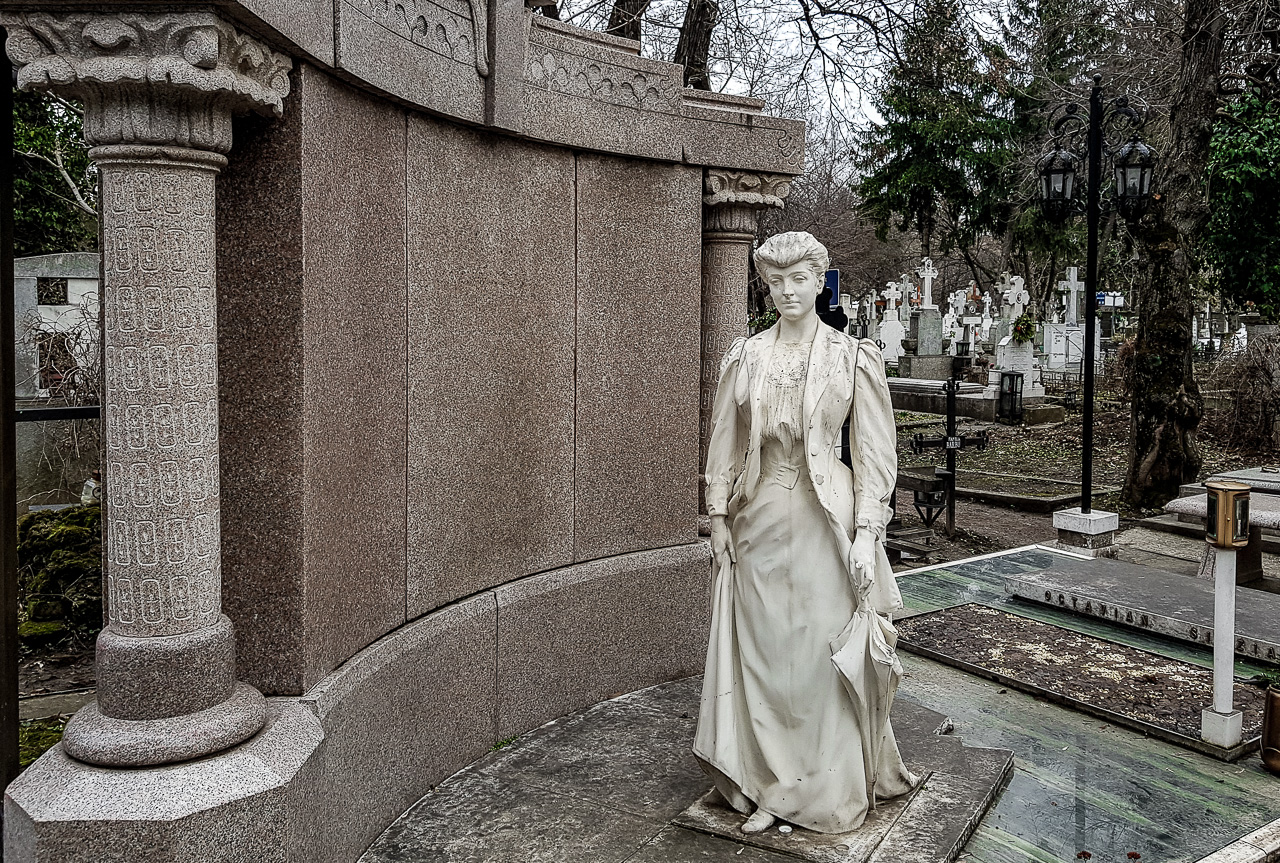 There was supposedly an inscription written in French on the monument which said, “This doctor killed me!” but the inscription no longer exist today or maybe it never was there in the first place.

It’s not clear who the doctor was who supposedly killed her but as a “fun fact”, the sculpture does look at a tomb of another doctor buried nearby, that of Mina Minovici.

The tomb of Iulia Hasdeu

Iulia Hasdeu was a child prodigy, the daughter of the writer Bogdan Petriceicu Hasdeu. Unfortunately, Iulia died young, at the age of only 19. Her father was never able to cope with her death and tried all his life to find a way to communicate with her, even during séances.  He truly believed that his daughter had found a way to communicate with him and she is supposedly the one who told him what her tombstone should look like. No one knows why, but people started using her grave as a…library. Sometimes there are books there, either because someone leaves them for other to read or because simply people take books they find there and replace them with other they want to pass on.

These are just part of the interesting monuments you can see at the Bellu Cemetery. There are other impressive monuments and mausoleums here, as well as more discreet tombstones that still uncover old stories through certain details like a family heraldry or fresh flowers that are placed each day by unknown persons. 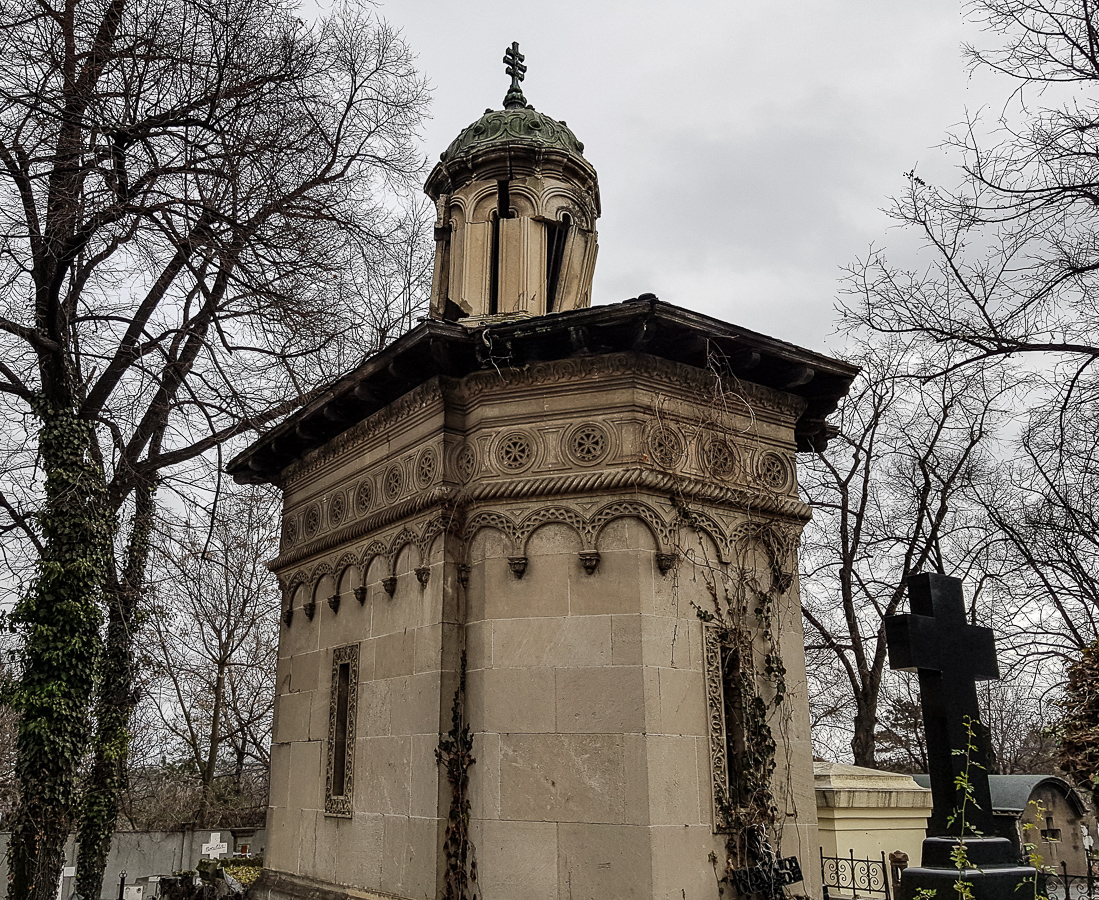 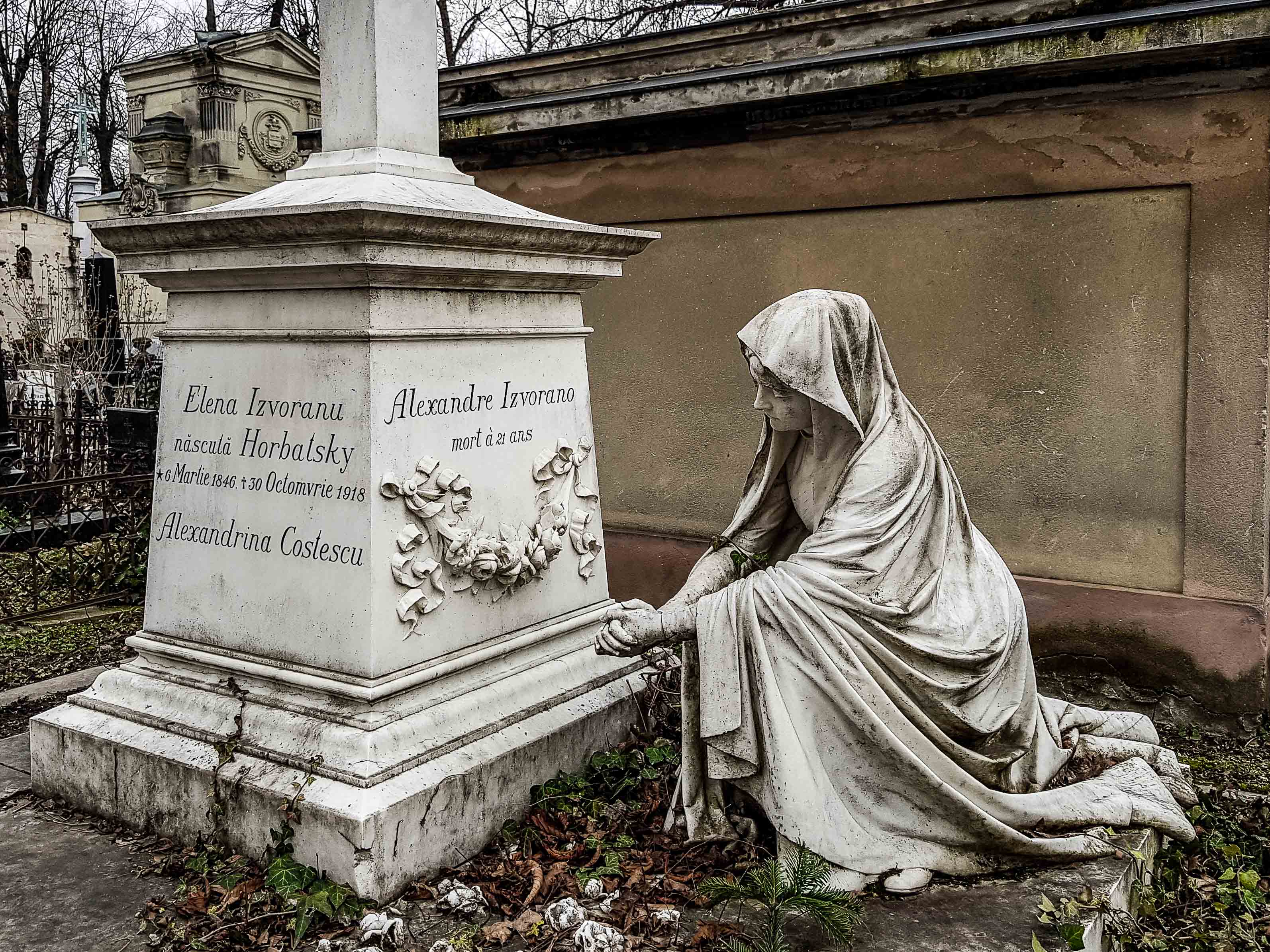 In time, the Bellu Cemetery has become one of Bucharest’s attractions and it’s an interesting location for those passionate about architecture and history or for those who want to visit some of the “haunted” places in Bucharest. 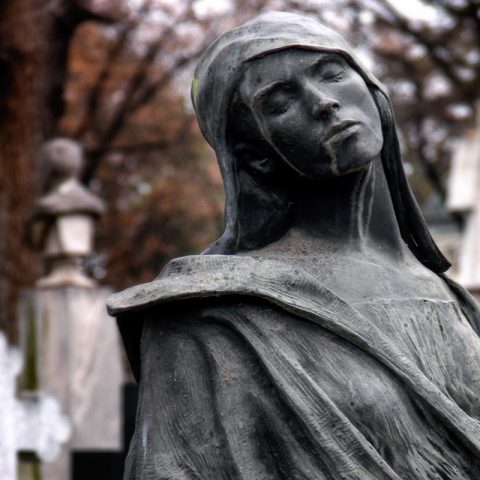