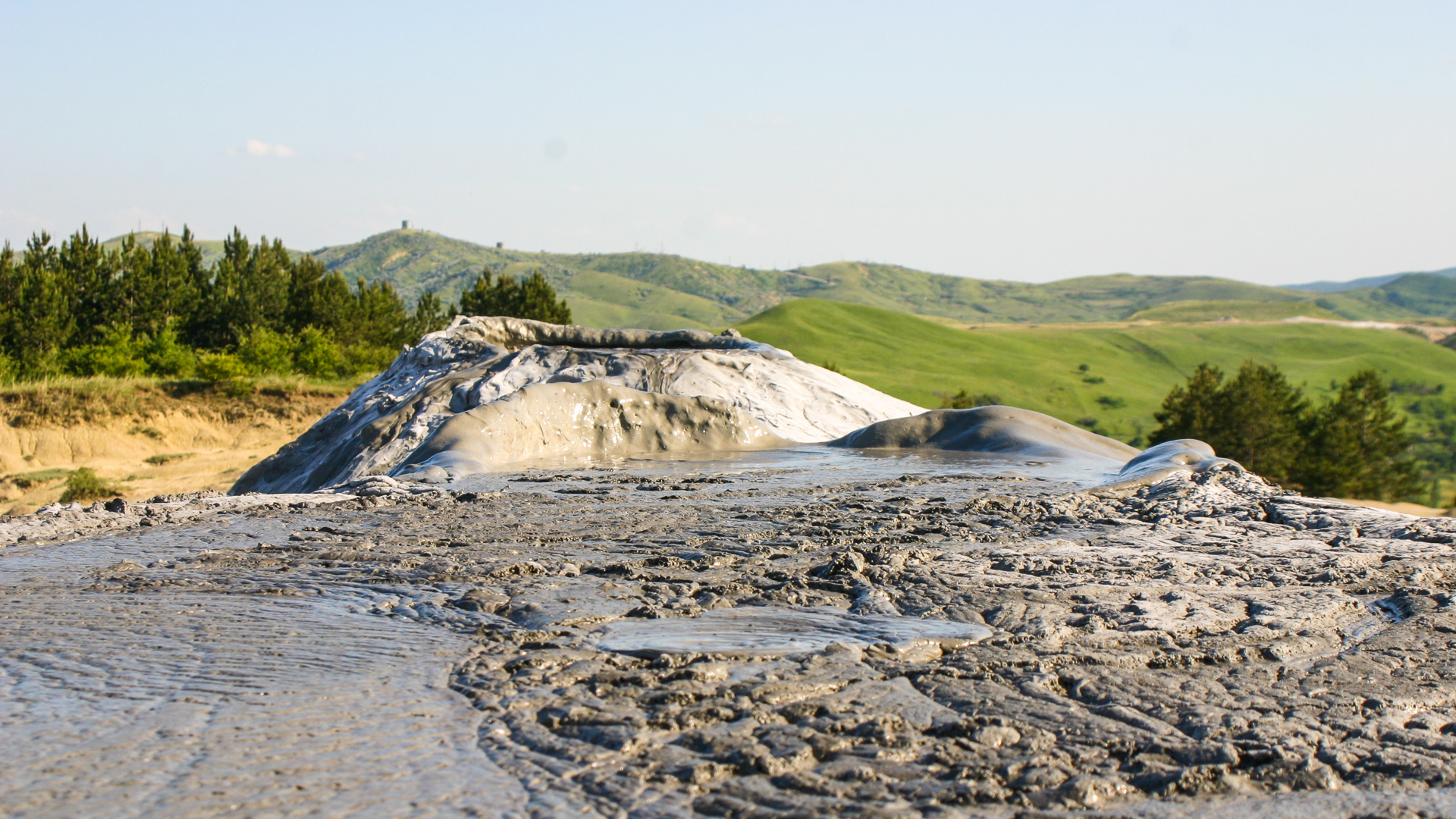 In recent years, the Mud Volcanoes located in Berca, Buzau County, have become a frequented tourist destination and probably the most famous geological monument in Romania. The strange scenery of the cracked clay, the various colors of the “lava” emerged from the clay, transformed the place into a natural studio for photographic essays, decoration for SF film productions, fashion editorials and advertising clips. For photographers, it’s a generous subject and, to some extent, easy: it’s hard not to take good pictures of active volcanoes, even if they are not real. For many, the mud volcanoes are very similar to an eerie lunar landscape.

How were the mud volcanoes formed

The origins of these mysterious mud volcanoes can be understood by anyone. The gas from the oil deposits goes to the surface, trained by the groundwater, generating craters and cones with the appearance of volcanoes, but which have nothing to do with the volcanism phenomena itself. In other words, they are just mud formations parodying the real volcanoes on a small scale. However, mud volcanoes are more common than you think and have a deeper geological significance. Therefore, although they are isolative as distribution, they are part of an “archipelago” of similar phenomena on Earth, which are related to large subduction zones, with hypocenters of powerful earthquakes, due to the movement of plaques.

In light of recent, mud volcanoes would have played an important role in the emergence of life on our planet. Or even on other planets. Research studies published by NASA in 2010 show that mud volcanoes also manifest themselves as a cosmic phenomenon. In NASA’s photos made with the 2001 Mars Odyssey Space Robot, the specialists identified on Mars formations very similar to earthly mud volcanoes. So, we could say that the mud volcanoes are not only similar to a lunar landscape, but also similar to Mars.

Mud volcanoes are not rare on Earth. Several thousands of mud volcanoes have been identified in about 40 regions. Only 10% are visible, being in continental areas, the rest are found under water. In Azerbaijan and in the Caspian region there are some of the largest ones, with cones having a diameter of 1-2 kilometers and depths of up to 600 meters. By comparison, the Romanian mud volcanoes are dwarfs, but, paradoxically, maybe this is to their advantage: you don’t have to travel to remote or isolated areas to see them. North of Buzau, on a road that passes through a pleasant landscape, you can reach within a couple of hours the area of the mud volcanoes.

What you should know about the Buzau region

The region was once very rich in oil. Between the two world wars, it competed with the volume of the Prahova Valley, so it was one of the most productive oil fields in the world at that time. The oil in the Subcarpathians of Buzau was also of special quality, being low in paraffin. Its presence at shallow depths made extraction possible as early as 1517 using simple pits. By 1925, there was an oil mine in Sarata-Monteoru – an exploitation made through galleries instead of probes. The volcano mud brings to the surface low amounts of hydrocarbons and salt, as well as fragments of sedimentary rocks and fossil organisms. 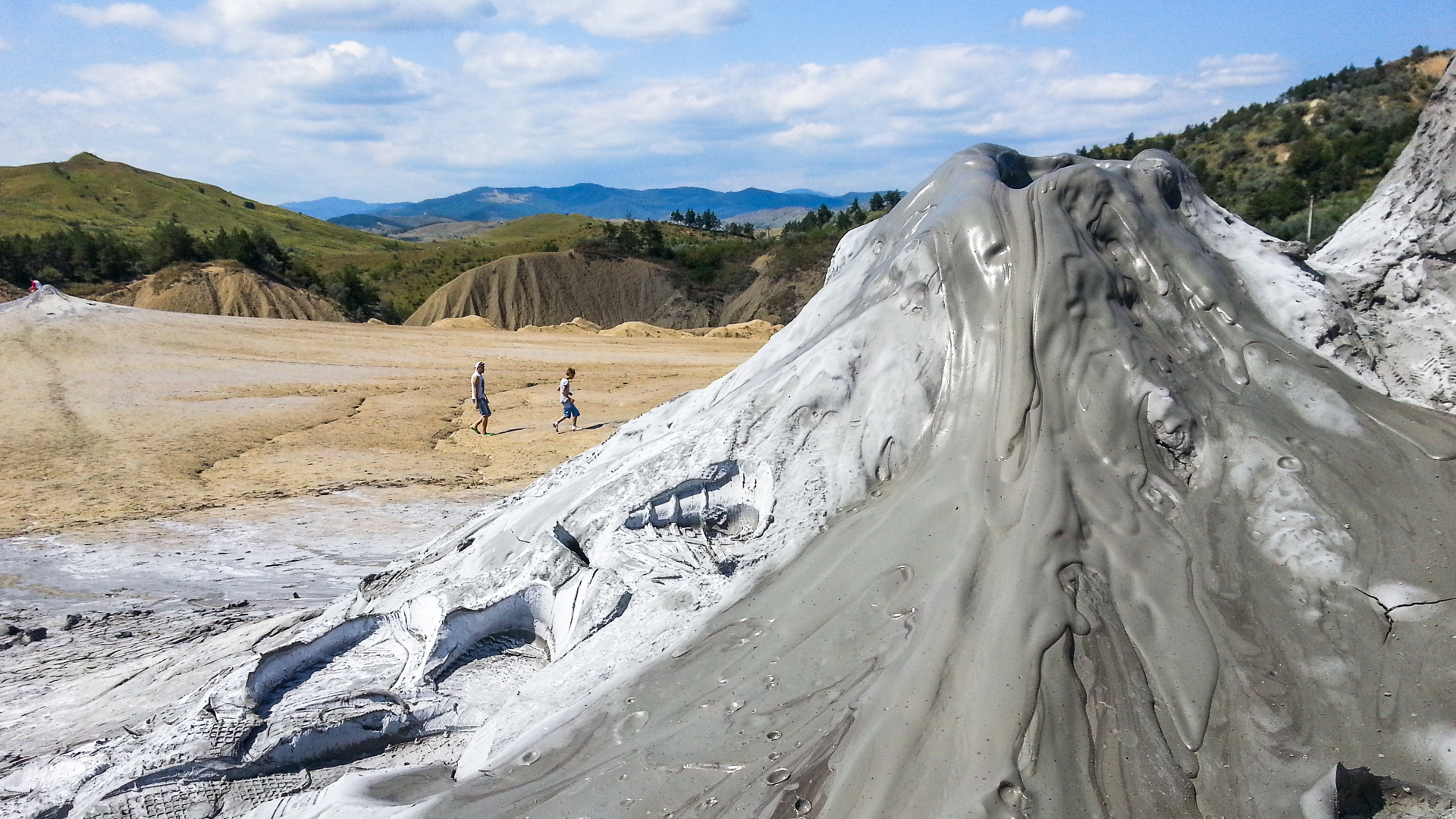 During droughts, a salt efflorescence occurs on the plateaus of the mud volcanoes, which originates through the crystallization of salt, following the evaporation of water from the mud thrown during the eruption. Of particular geological and botanical importance, in the natural reserve, at the edge of the mud fields grow two shrubs, declared monuments of nature: Nitraria schoberri and Obione verrucifera. On the other hand, the fauna of this place records the presence of two rare species: the scorpion and the termite.

Of course, local legends are also very popular and like in the case of any natural phenomena for which people didn’t have a proper explanation in the past.  For example, in the case of the mud volcanoes, the elders have gathered some scary stories. It is said that the dry and cracked ground resembles the skin of a dragon hiding underneath the earth, and the mud that comes out is actually the dirty and cursed blood of the creature.

How to get to the mud volcanoes

The mud volcanoes from Romania are all the more important as the European continent hosts very few such phenomena on its surface. For this reason, the Mud Volcanoes in Buzau often attract tourists from all over Europe and even from other continents, many filming crews choosing the Great or Small “Pacle” for scenes with lunar landscapes.

The Mud Volcanoes are easily reached from Buzau, being just 35 km away, a distance of which more than half is made by car on the national road DN10 in good conditions.

The location is perfect for a day trip but for those who have more time on their hands, the area deserves to be explored further. The volcanoes are surrounded by a picturesque hilly area with a biodiversity worthy of the title of monument of nature.

You should avoid visiting the area when it rains and have some rain boots because your risk getting stuck in the mud. During summer, when the earth is dry, the area is more accessible.

This attraction can also be visited as part of a more extensive tour in the region, such as a tour of the painted churches scattered throughout Moldavia and Bucovina. For more travel itinerary idea, check out our other tours in Romania or don’t hesitate to contact us to help you plan your trip.